The penultimate round of the Enduro World Series headed to Northstar ski resort close to Lake Tahoe, California. Fresh off a successful Crankworx and EWS in Whistler Eddie and Matt were excited to keep the ball rolling. Set up to enjoy the USA in style with a 35-foot RV that would be home for the next few days, allowing them to enjoy California and be as close to the race action as possible.

With all stages over 2000 m altitude the thin air would add to the challenge and the fatigue. No significant rainfall since March meant conditions would be dry and dusty. So dusty that the organizers had allowed additional time gaps between racers runs to allow the dust to settle and visibility to improve. 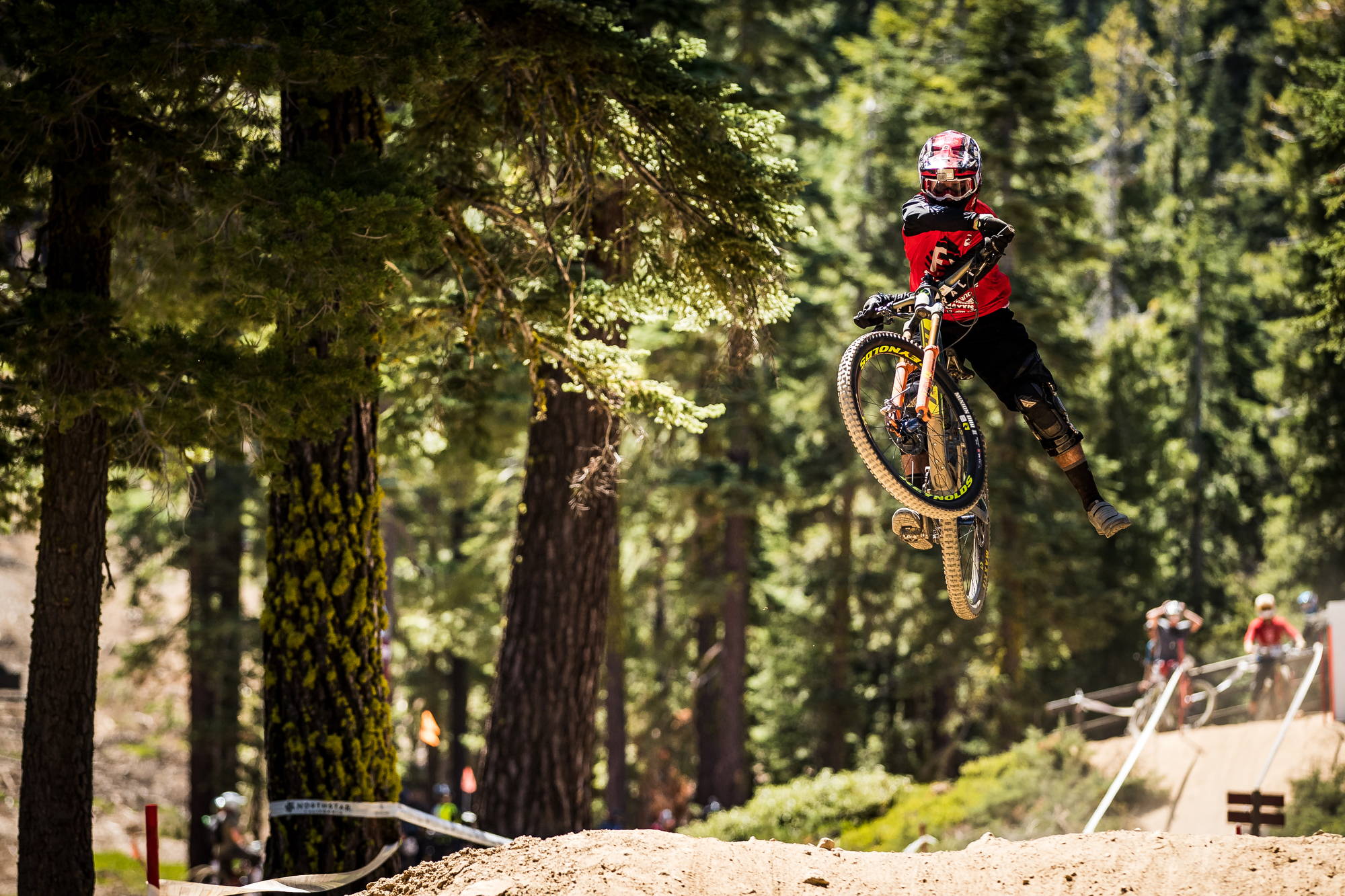 It was soon clear that the predictions of dusty conditions were correct. The deep dust covered everything, making the trails slick and unpredictable. The dusty alpine trails were also covered in rocks of all shapes and sizes to really test man and machine.

Training got underway and Eddie and Matt were adapting to the dust well. Dust surfing was the best description for the trails with a similar feeling to riding in the mud and wet conditions. All the stages had a similar vibe with flat out bike park sections punctured with awkward rock gardens. Stage 3 was the longest and featured a new top section to the trail that then dropped into some fast and fun bike park trails with blown out berms and a high speed finish.

Stage 4 was a brand new trail for the event and boasted one of the hardest man-made rock gardens the riders had seen. Eddie took multiple looks at lines and pushed back up to ride the section more than any other section on the Enduro World Series. Team mechanic Kurt who rides the training stages with Eddie and Matt commented that the trails were some of the hardest and scariest he has ever seen.

After a morning of training Eddie and Matt were buzzing to get racing. No peddling required to get to the first two stages would make for some hard and fast racing in the dust. Stage 1 started off brilliant for both pivot riders. Tight times over the 5-minute-long stage saw the top 10 separated by less than 15 seconds with Eddie and Matt posting the 4th and 5th fastest times, a brilliant start to the weekend.

Stage 2 ran down the ‘Karpiel’ and ‘Lower Sticks’ trail in the bike park and although shorter we not less though. Matt was the first Pivot rider to finish the day and another good ride saw him tackle the rocks as fast and as smoothly as possible to finishing 16th on the stage. Ending day one in 8th Matt was happy to head into the second day in a great overall position.

The team waited in the finish area for Eddie to cross the line but as time ticked by he didn’t appear. Eventually news came that he crashed, flying over the bars Eddie had put his arms out to break his fall and injured his wrist. Jumping straight back on the bike he soon knew something more serious was wrong as he couldn’t hold the handlebars and had to pull out of the event.

A DNF for Eddie is huge disappointment and overshadowed a brilliant ride for Matt. Eddie was still smiling and even gave an interview as he was driven away to the hospital for X-rays and further treatment. 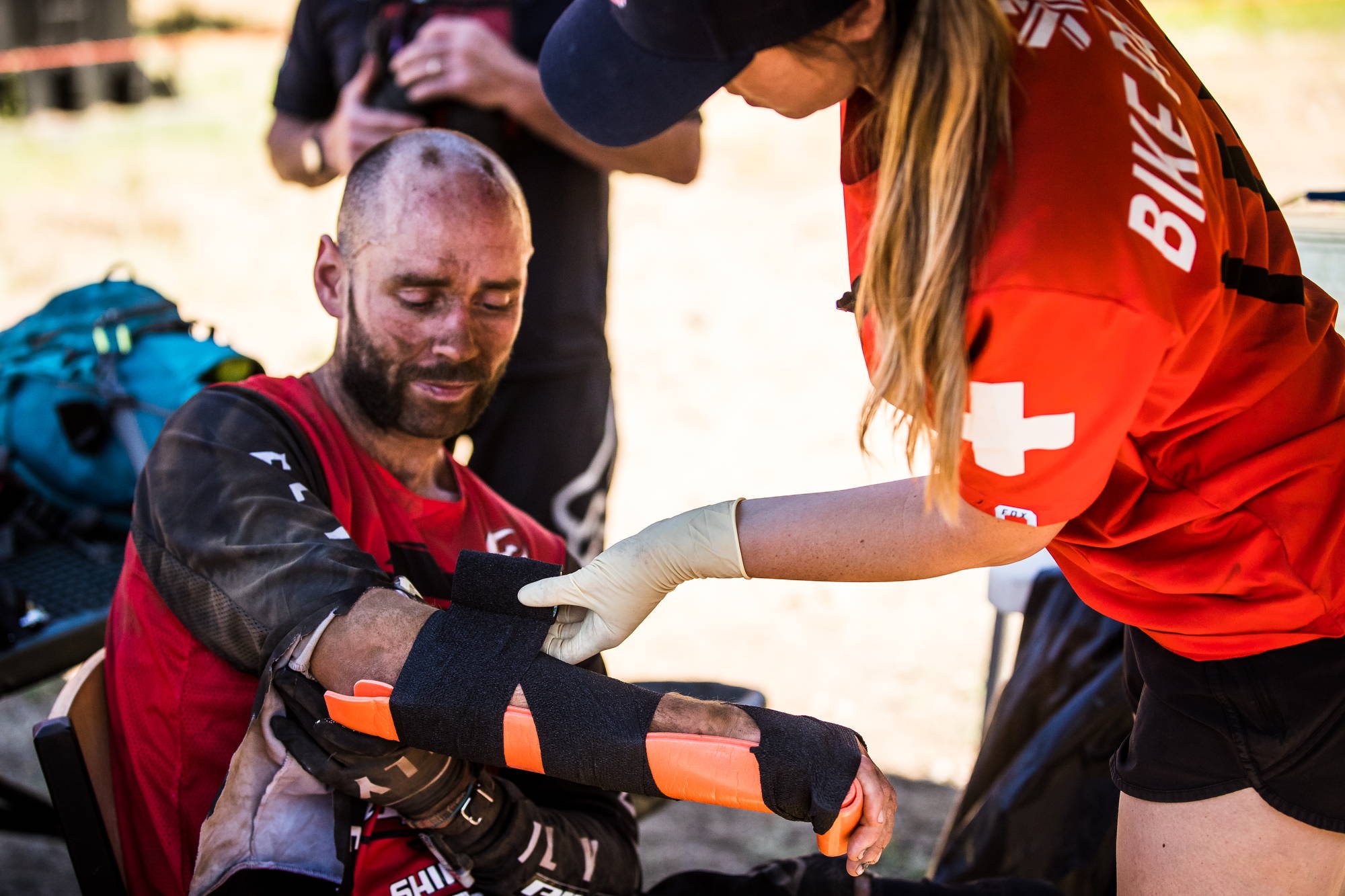 Motivation wasn’t as high as normal after Eddies crash the previous day. News that Eddie had broken and dislocated his wrist was a huge blow to the team but Matt didn’t have too long to contemplate this as he was soon racing the final 4 stages of the weekend.

Stage 3 started the day and as the longest of the weekend, this stage was rightfully the Queen Stage. At over 8 minutes on the toughest rocky terrain it was a wake up call for Matt. Riding strongly he posted the 9th fastest time of the stage to strengthen his top 10 in the overall.

Stage 4 was one of the most brutal of the race. Some jumps and a road gap allowed the riders some respite from the relentless rock but one especially gnarly rock chute kept the riders focused. Taking care on the tricky rock chute but letting the bike roll in the open Matt posted another top 10 time on the stage and kept his consistency going.

The final two stages were pretty short but no less brutal. Each of the stages had long rock gardens that were a challenge for fatigued riders and bikes. Huge crowds had made their way down from all the other stages to the finish arena and the atmosphere was brilliant. Matt didn’t have the best ride by his own admission, struggling to find flow on the janky rocks he finished the final stages in 21st and 17th.

A strong ride over a tough weekend gave Matt another top 10 result in 9th. A great result from Matt, especially considering the injury to his team mate, and good friend . With a long travel day ahead Matt heads back to Canada to join Emilie and Bernard for the Downhill World Championships in Mont Saint Anne.

Eddie is staying in the USA for surgery on his wrist but is hoping to join the team for the final few races of the year to cheer on from the side and keep everyone entertained. 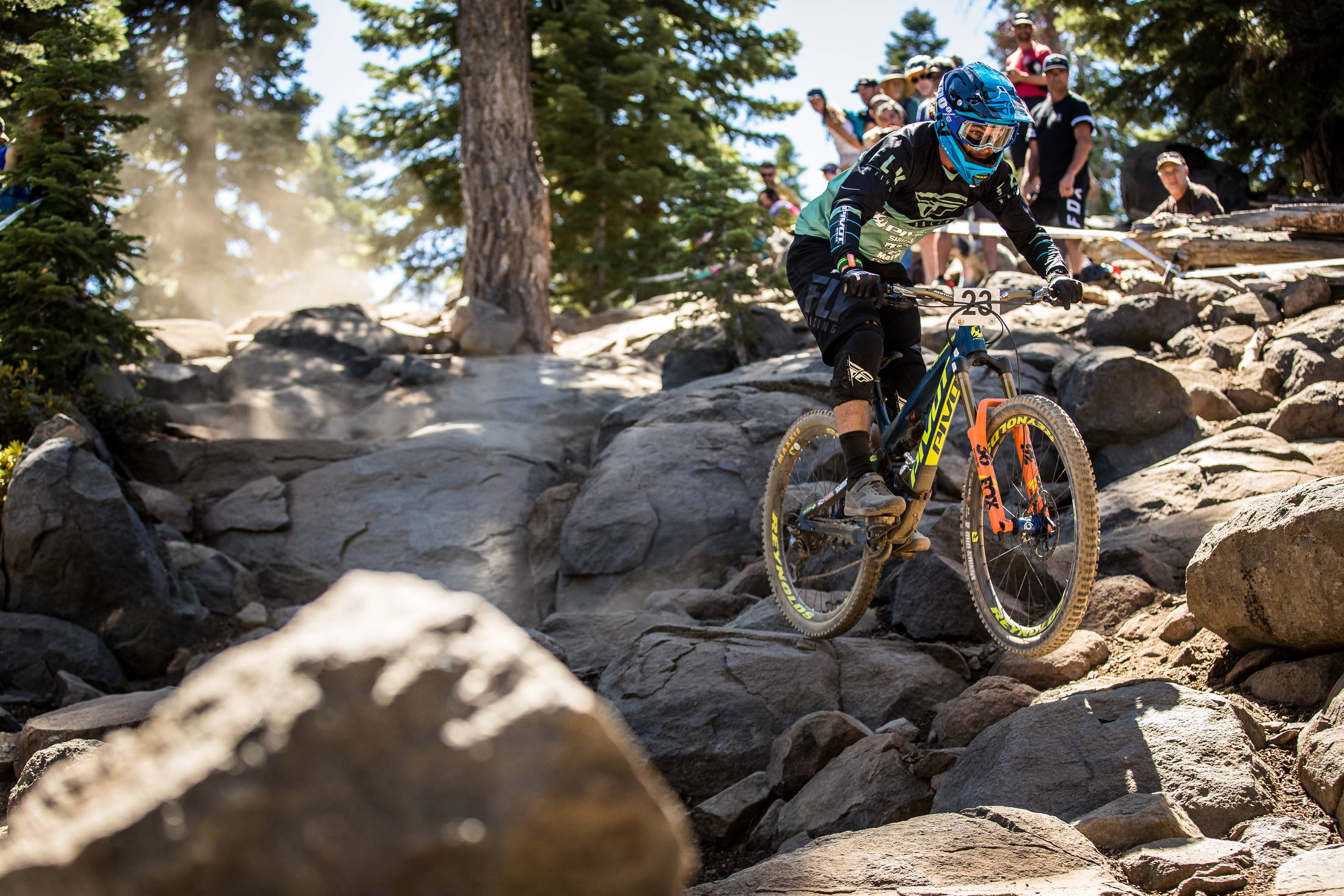