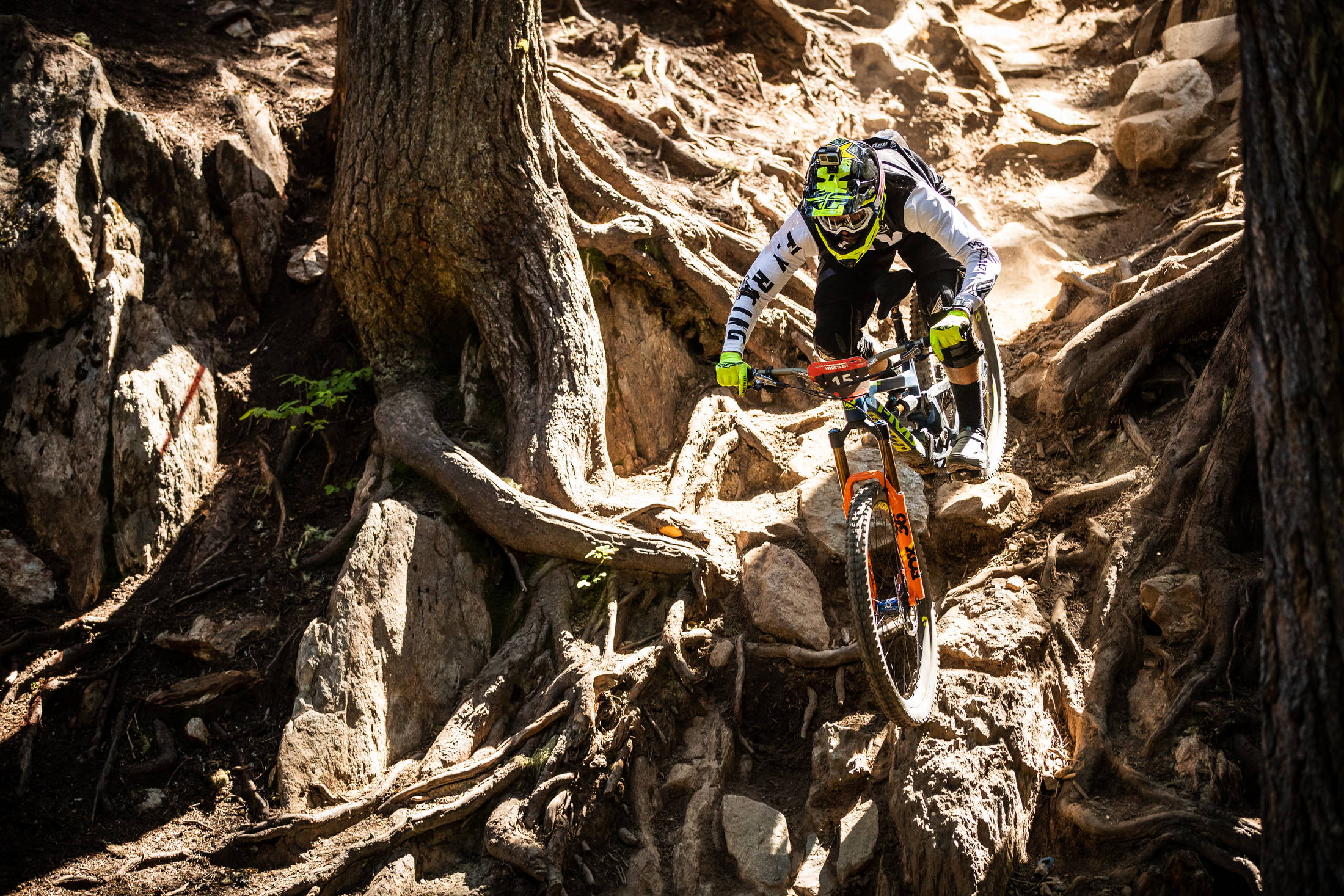 With two events on two continents, the Pivot factory racing team was split between round 7 of the UCI downhill World Cup in Lenzerheide and round 6 of the Enduro World Series in Whistler. Eddie and Matt were preforming strongly in 2nd and 16th in the EWS overall and were keen to push for a high season finish. This left Emilie to ride her home race in Lenzerheide while Bernard was still recovering from a hand injury.

Track walk in Lenzerheide was a wet affair, heavy rain from the previous days did not relent and the track was looking muddy, slick and challenging. A few changes from previous years were welcomed. Missing the top rock garden was a blessing in the wet conditions but lower down a fresh muddy shoot was going to cut up, expose roots and cause some puzzling. 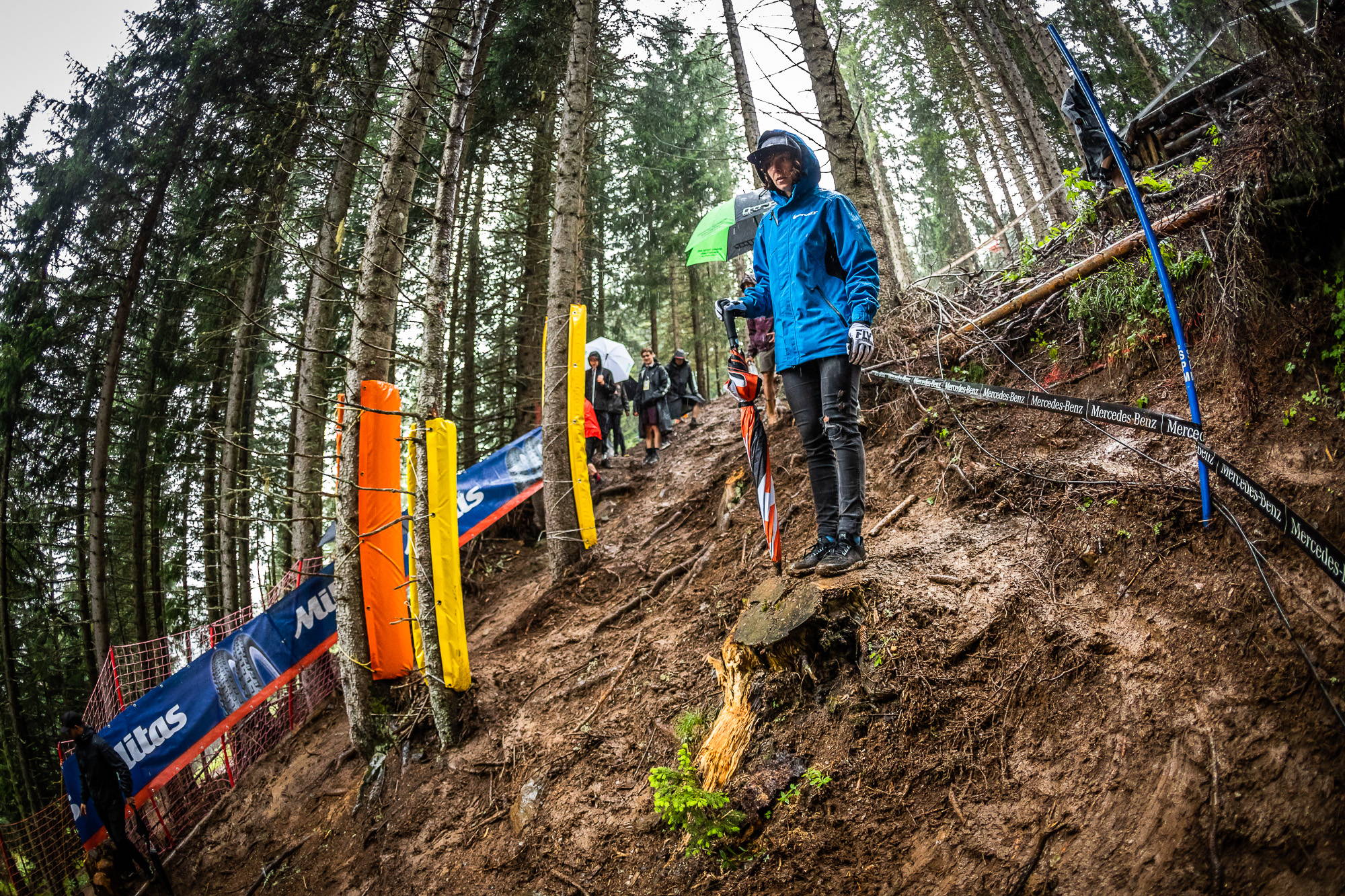 Emilie started training late to let the track dry and allow some ruts and lines to cut in. She was enjoying the track and the added technical challenge that the mud and conditions gave. The full mud spike tires that Emilie was running in the morning were swapped out for dry tires as the sun came out and dried the track with every passing hour.

Emilie finished the day with 3 runs in the timed training session, with loads of new lines opening up on the drying track, and following the day of training Emilie learned a lot and was building speed ready to race.

For the first time ever the Whistler EWS was held over two days. This gave riders two days training to learn the tracks, scope out lines and prepare for the race. Day one training was on stages 5, 6 and 1. Eddie and Matt were enjoying the riding in Canada and having fun on the bikes down the challenging tracks.

Stage 6 was a touch track, including bike park trails such as In Deep, Whistler DH, and Joyride, it was going to be a killer on the arms to finish the weekends racing. Stage 1 was the classic top of the world trail, from Whistler peak to the village it was well entitled to the Queen stage title. Over 11km of alpine single track into a full top to bottom bike park lap was going to separate the best riders in the world.

Eddie used the training day to his advantage, blowing through the tape and going straight on after high speed sections of track three times, he made a mental note to slow up for the race run. 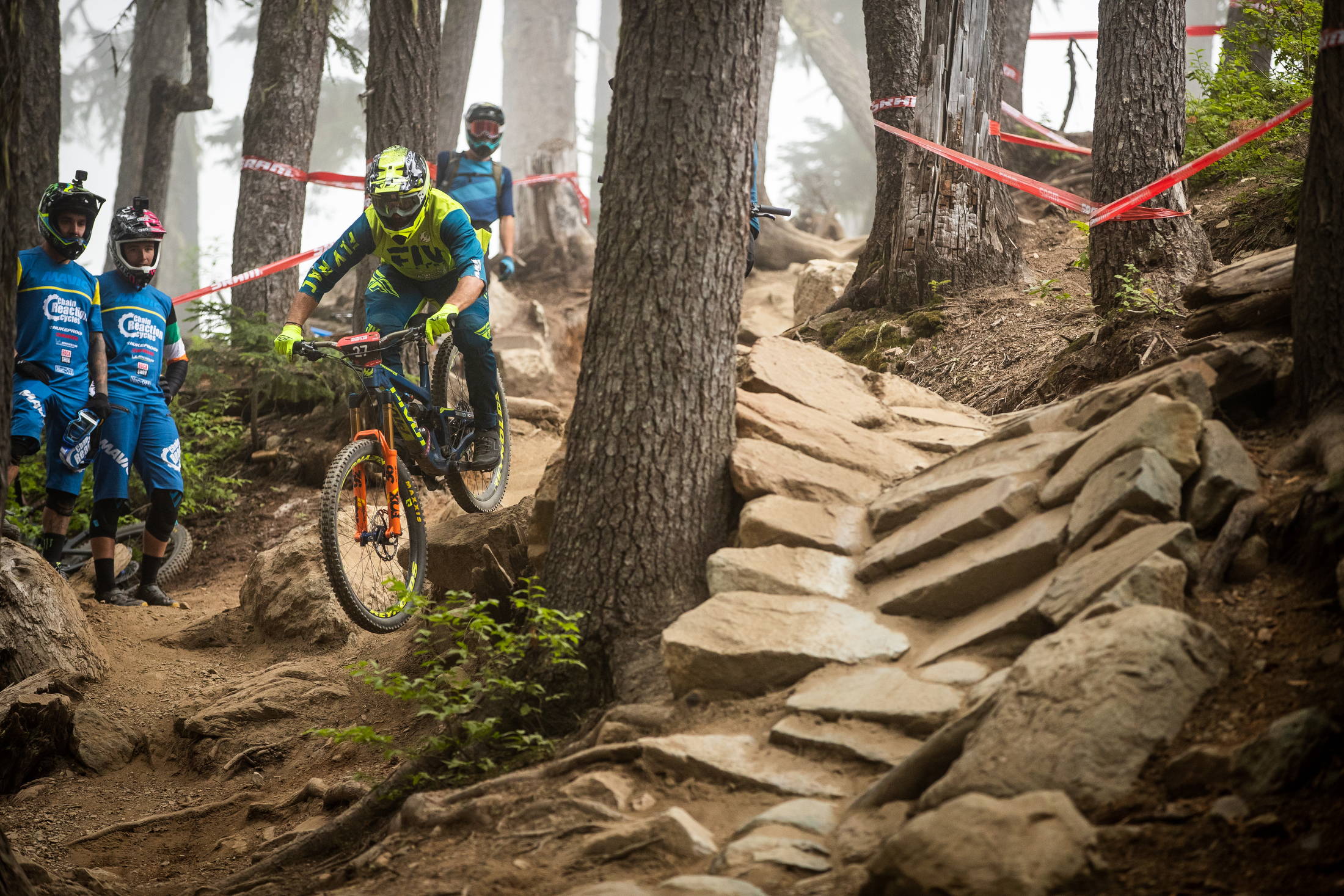 By the time Emilie’s qualification run came around the track was running dry and fast. She was enjoying the conditions and added grip and set off on the qualifying run hard. Peddling hard at the top and committing through the steeper looser, sections she knew she was on a good run. Posting fastest times at each split she crossed the line 5 seconds up on the current fastest qualifier. As more and more women finished their runs Emilie’s time held, only the last few riders could better the time and Emilie finished with a great 5th place qualifying.

Training on stages 2, 3 and 4 awaited Matt and Eddie on Thursday. Stages 2 and 3 were outside the bike park and required a little more peddling effort to get to. Stage 3 down ‘roam in the loam’ and ‘golden boner’ was a riders favorite. Natural, roots and loamy ground is fun to ride and race, and Eddie and Matt were having fun following each other, filming GoPro footage and learning lines.

Morning rain and fog threw a spanner in the works for downhill finals. The rain made the track slick and Emilie was enjoying sliding around and getting a bit loose on track. The fog lingered for Emilie's final run and the track remained slick, some risks were needed for a fast time.

Emilie attacked out the gate with a hard sprint and settled into her run. Attacking and taking risks you could see her tires sliding on the big screen in front of the packed crowd. Going fastest through the first two splits Emilie was having a flying run. Off the final drop into the finish area, Emilie crossed the line in 1st by the smallest of margins. A fantastic ride guaranteed Emilie another podium finish and following an exciting woman’s race she finished 3rd.

A fantastic result at her home race after a challenging weekend with conditions changing each session. Emilie soaked up the home support with friends and family congratulating her on her best result of 2019 season. 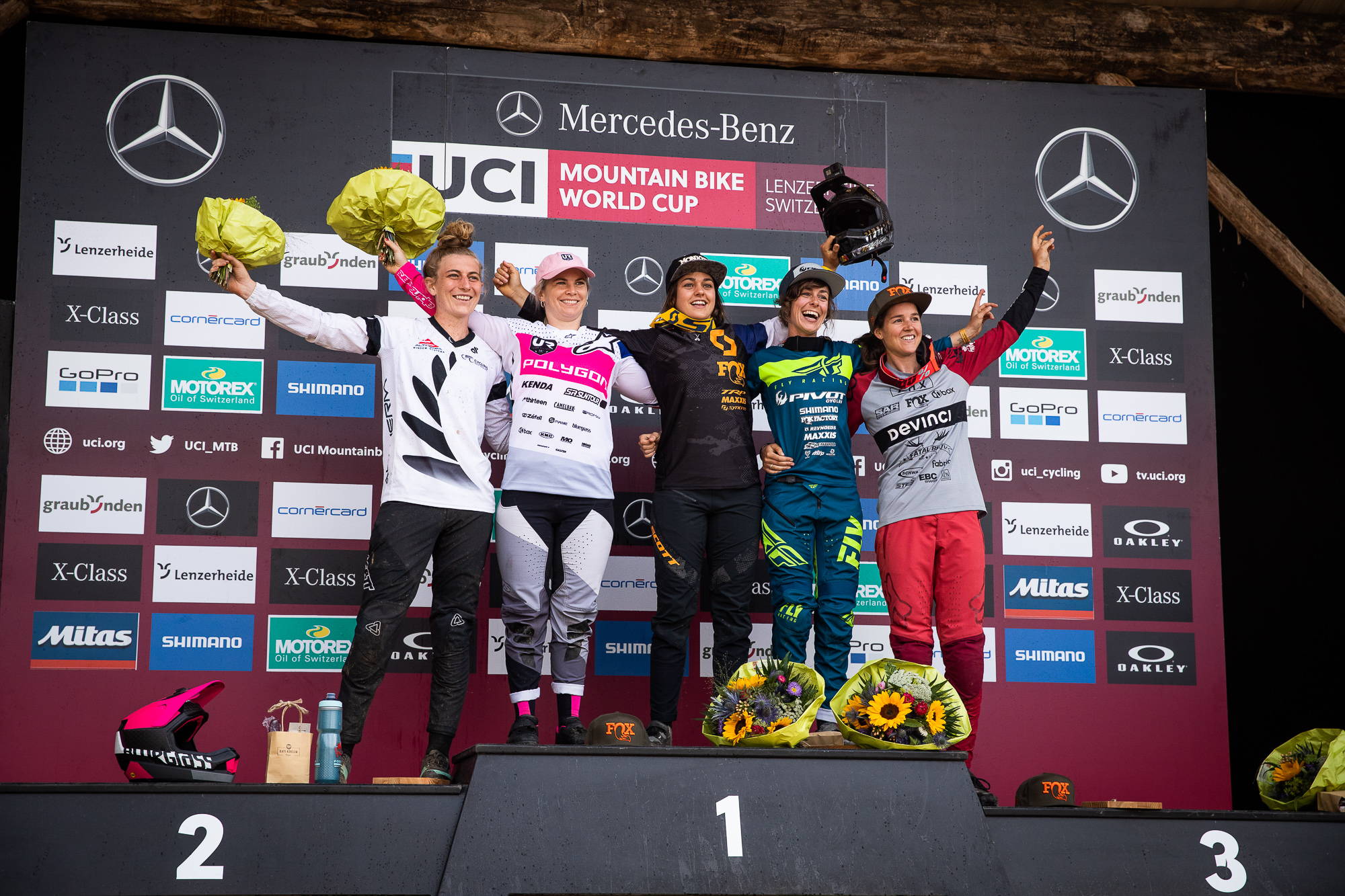 Day one of the EWS in Whistler started with a bang. The Queen Stage was an 11km race from Whistler peak to the village. At almost 20 minutes of race time, this is one of the most physical tracks that the riders will tackle all year. Matt was the first Pivot rider down and was on a flyer. Riding strong but being careful not to push too hard he measured his efforts brilliantly. Posting the 4th fastest time on the stage set off Matts weekend brilliantly.

Eddie was the second to last rider to drop in due to his high overall placing. This late start time causing some hindrance as the rain started to fall when he talked the track. Riding the track in the rain with changing conditions top to bottom was challenging for Eddie and he was disappointed to finish 13th.

Day two at the EWS in Whistler started in the rain. With wet conditions making the tracks slick, particularly the roots on stage 5. After a disappointing start, Eddie was revved up for the second race day and started off in the best way possible winning stage 2 and coming seconds on stage 3. The technical stages with mid-stage climbs made for awkward and physical riding where Eddie thrives and moved him up to 2nd in the overall.

Matts motivation was high after a great stage 1 performance. Attacking hard on stage 2 Matt was going well until getting caught out on some wet roots. A small crash didn’t cost Matt too much time and he was soon back up to speed. Opting for a safer approach on stage 3 Matt rode a clean stage finishing 13th and moving him to 5th in the overall.

Stage 4 headed back into the bike park and although the roots were slippery, the moist dirt and rocks offers a surprising amount of grip. Matt tackled the stage with confidence but a few mistakes took him off line and lost him time in crucial sections. Eddie continued his good run of form with the 4th fastest stage time. Enjoying the bike park sections and the big rock rolls Whistler is famous for.

Stage 5 had the riders nervous all day. One of the more freshly made trails the riders raced on the rain would make the going muddy and tough. Wet roots sprawling in all directions on corners, shoots and climbs would cause an even bigger problem.

Matt rode a solid stage to finish 11th, putting him in 9th overall going into the final stage. Eddie had an admittedly scruffy run, losing some time to his rivals but keeping him in podium contention for the overall.

The final stage was another physical challenge down some of the fastest and roughest trails in the bike park. Matt attacked hard putting down a brilliant ride to take 5th on the stage and move him up to finish the day 8th overall.

Eddie started the stage hard but two crashes cost him time, getting back on the bike he took risks and pushed hard to maintain his podium finish for the second year in a row. Both riders were chuffed with their performance over the weekend and both have strengthened their position in the Enduro World Series 2019 overall standings.

After two well earned 3rd place finished at both events the whole team will be racing next week in Whistler for Crankworx, stay tuned for more exciting racing! 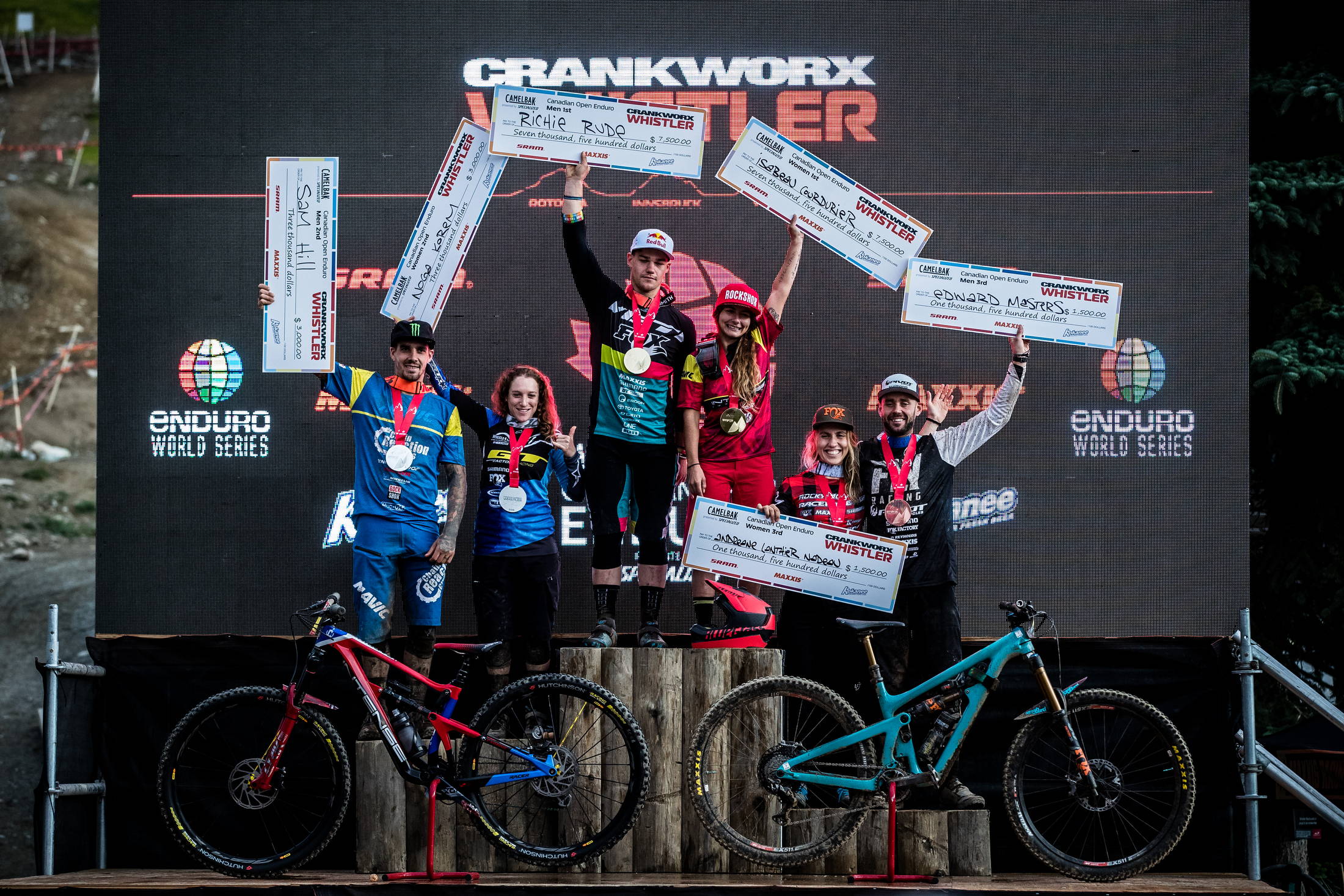