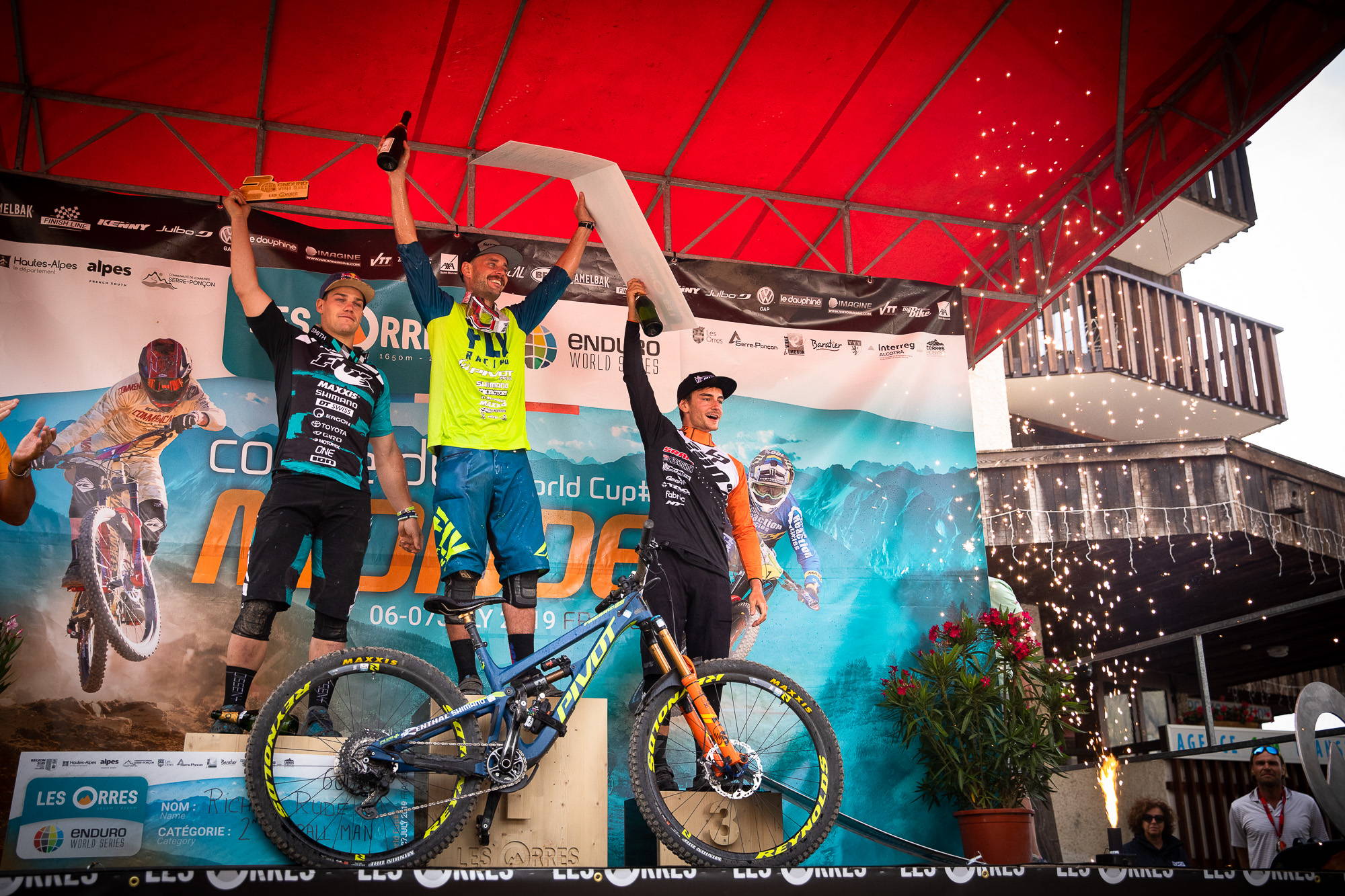 It was a busy weekend of racing that saw the Pivot Factory Racing hitting two separate races, in two different countries, and the effort paid off in a win for Ed Masters. After a the success of the previous weekend racing at the EWS in Val Di Fassa, Eddie was sitting on 3rd in the overall championship. Making the tough call, Eddie and enduro teammate Matt Walker made the decision to race the Enduro World Series round 5 in Les Orres, missing the Downhill World Cup in Andorra. Emilie and Bernard would be flying the flag in Andorra on the downhill bikes ready to attack the steep and rough track. 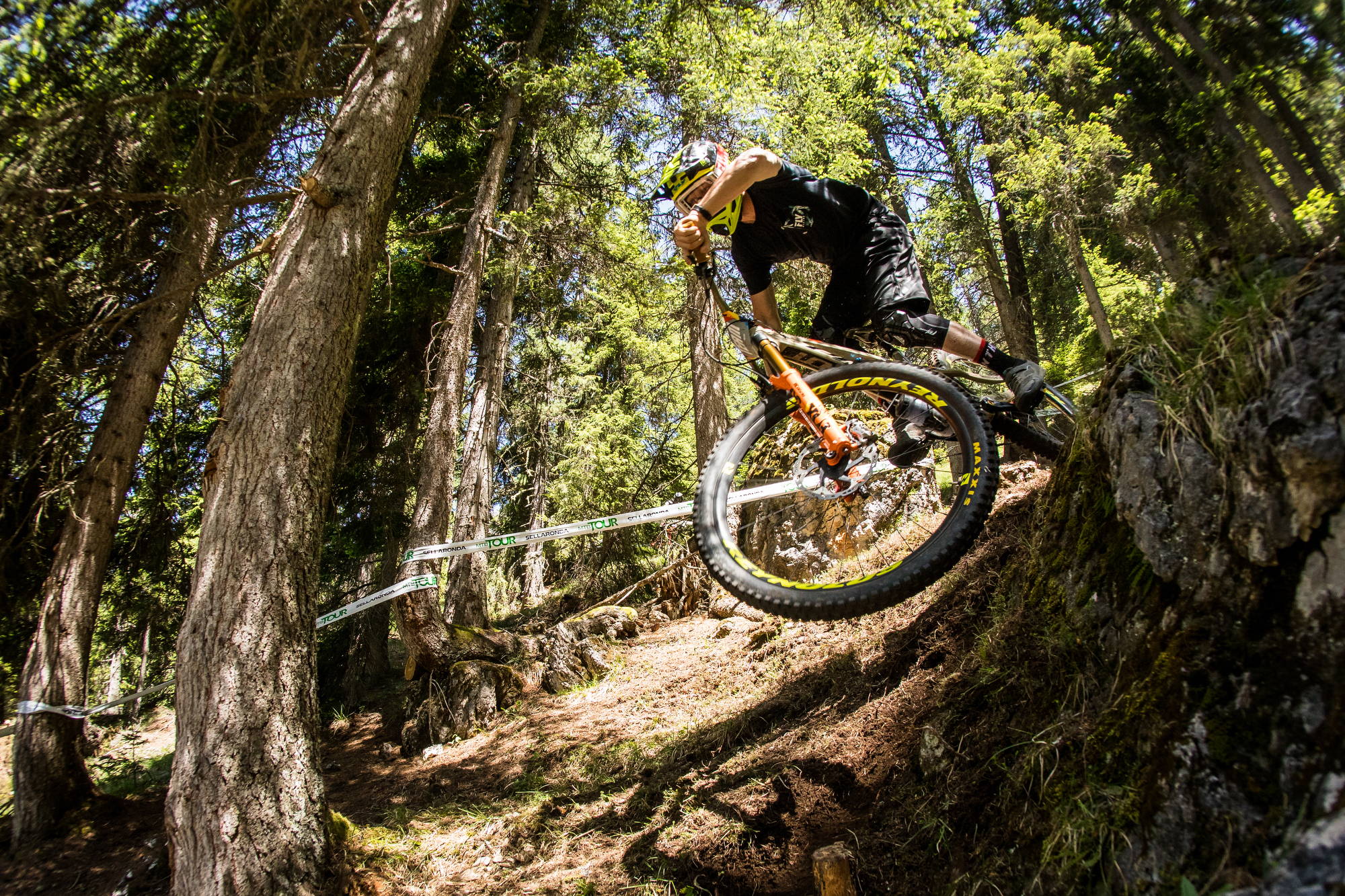 Day one of training in Les Orres gave Eddie and Matt the chance to ride stages 1 to 4 that they would be racing on Saturday. Most of the trails follow the existing hand cut trails in the bike park. Heavy rain at the start of the week left some soft trails with some slick sections.

Stage 2 was a monster and quite rightly the queen stage. With 1050m descending, a few little climbs and some brand new fresh loamy sections it would test all aspects of the riders.

Stage 3 was super techy and tight to start. Eddie was enjoying sliding the back wheel round the tight corners while Matt used the ‘Enduro turn’, pivoting on the front brake and wheel before landing and peddling out the corner.

Stage 4 was the shortest of the weekend but came after a long 7km liaison. Matt and Eddie were both feeling good on the bike and getting used to the stages and mix of terrain and surfaces.

The Enduro started brilliantly with Eddie winning stage one by the smallest of margins; 0.3 seconds over a 6 minute stage is insanely close. Matt was also on a fast run crossing the line in 5th for a great start for both Pivot riders.

Stage 2 was the Queen stage and the longest of the weekend at over 10 minutes and 1000m descending. Eddie had found his flow in Les Orres and came second on the stage, only 3 seconds off the win.

Stage 3 was super steep and techy and riders needed to be patient to be fast. Consistent and clean riding from both Eddie and Matt saw them place 6thand 10th respectively. The tough stage caught some other riders out and after 3 stages Eddie was in the lead overall with Matt in 7th.

A long hot liaison up to stage 4 saw the fatigue set in and made the final stage harder than expected. Matt’s consistency paid off with another fast stage that saw him sitting in 7th overall after 4 stages. Eddie finished the stage 6th and would start the second day racing in 2nd overall. 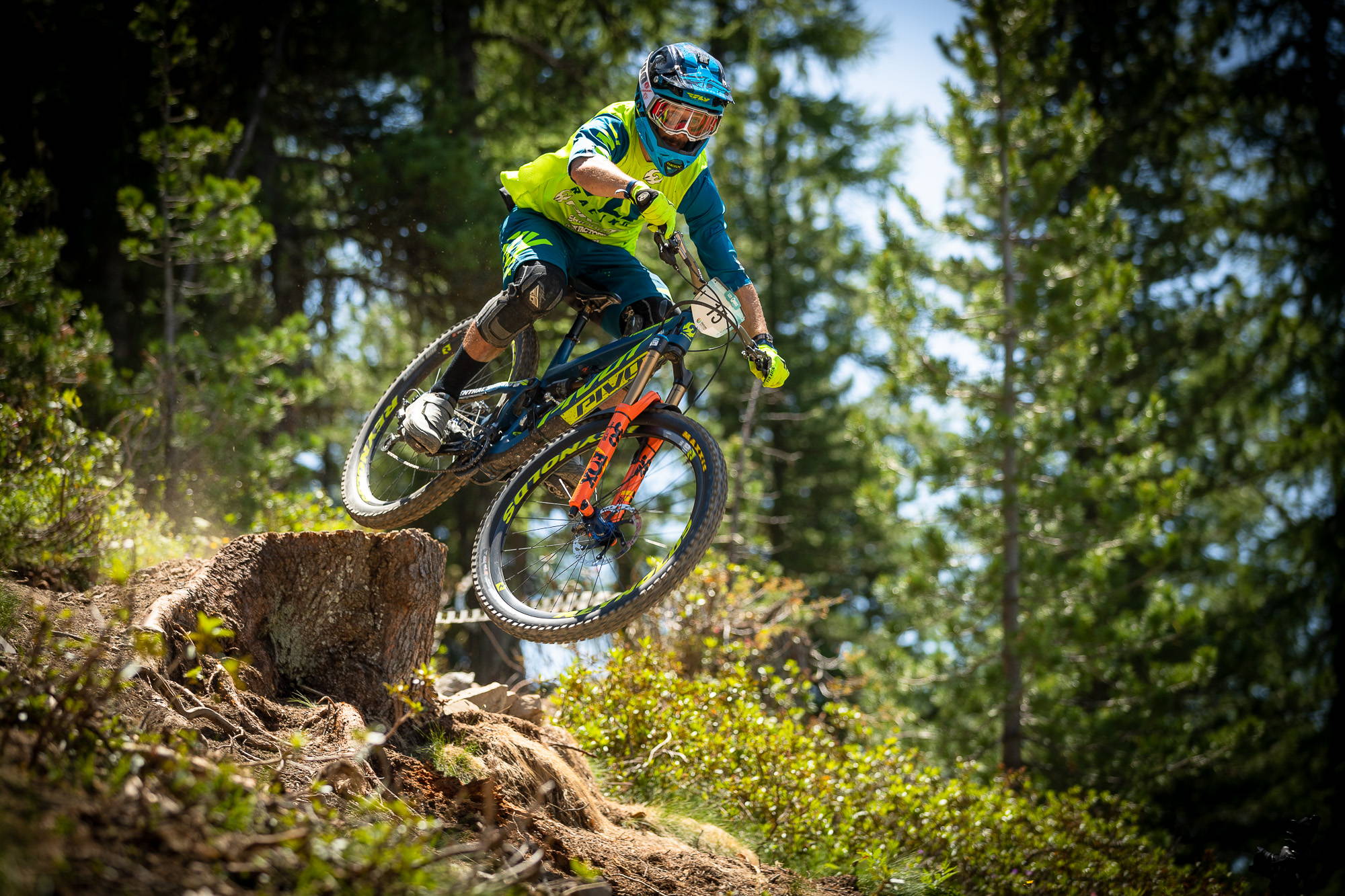 A huge storm in the morning forced stage 5 to be cancelled as the chair lifts were closed due to lighting risks. This left 3 stages to race on Sunday and with times incredibly tight anything could happen.

Stage 6 finished with some fresh loamy single-track turns. The riders were flying through the section finding the grip and pushing hard. Matt pushed a little too hard, sliding out within sight of the finish. Finishing in 6th despite the crash showed how fast he was riding. Eddie finished 4th on the stage and slipped back to 3rd overall.

Stage 7 was one of the few tracks that stayed mainly on bike park trails. Eddie put down a fantastic run, winning the stage by over 2 seconds and pushing him into the lead with one stage still to race.

After 40 minutes of racing and with one stage to race Matt was in 7th and Eddie was leading by less than half a second. The final stage was a relatively short run into town and the finish area. Matt had another solid run and finished 10th on the stage, securing 7th overall for the weekend.

Eddie was flying on the final stage, pushing the limits of grip in the wooded sections before sprinting as hard as possible across the ski piste and across the line winning the stage and winning the event. The team went crazy and rushed the finish area to congratulate him.

Eddie’s first Enduro World Series win and Matt’s 7th place also saw the team awarded the second fastest of the day! With the whole team in Les Orres there were big celebrations following a great weekend of podiums and wins at two events in two countries!

Over at Valnord in Andorra, pre-qualification training went well for both Bernard and Emilie; both working on slight improvements they were finding the track a fun challenge. The hot sun had dried off any sign of moisture on the track and some parts were becoming a dust bowl making vision a challenge.

Emilie charged out of the gate for her qualification run, carrying speed over the first split but really letting off the breaks lower down on the steeper more technical section that she excels at. Crossing the line in 1st there was a long wait until her time was bettered. Finishing with a 4th fastest qualifying time was a great result for Emilie and gave her a confidence boost for the final.

Equally impressively Bernard qualified 15th! Losing some time in the first split and then feeling he rode too safe there was more to come. The top 20 qualification guarantees a spot on the live Redbull TV feed and packed finish area with a great atmosphere.

Finals day for Emilie and Bernard was another hot and dusty one. With a super dry track breaking up and making one of the dustiest track either racer had ever ridden. Training in the morning was spent getting used to the dust and fine-tuning lines.

Emilie set off putting the power down out of the start gate and getting up to speed quick. Not the fastest on the first split she was gaining time all the way down going faster and faster as the track gets steeper and steeper. Hitting the bottom corners perfectly she crossed the line into 2nd, guaranteeing her a podium finish. You could hear her scream with happiness and relief when she crossed the line. A great result after a few tough races is brilliant for Emilie and the whole team was stoked. 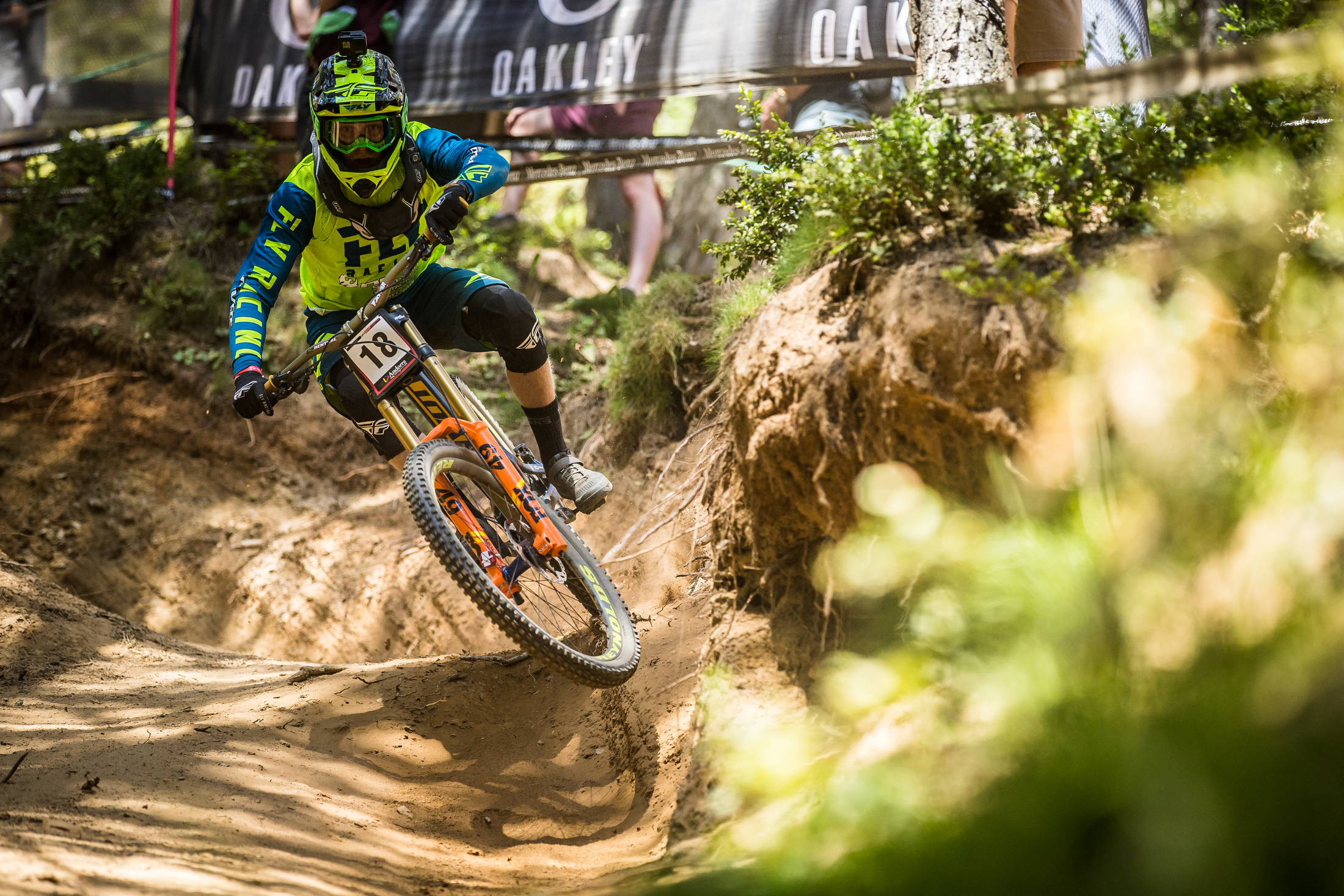 Bernard was on a flyer, pinning the key section and hitting his gap he was up by 2.5 seconds at split 3! The speed was there but the dry, tough conditions saw his wheel slip over the top of a corner and put him onto the floor. Losing time he was straight back up and charging down the track once again. Finishing in 17th on such a tough track with a crash is a fantastic result but not what Bernard wanted. He will be charging next week in Les Gets.